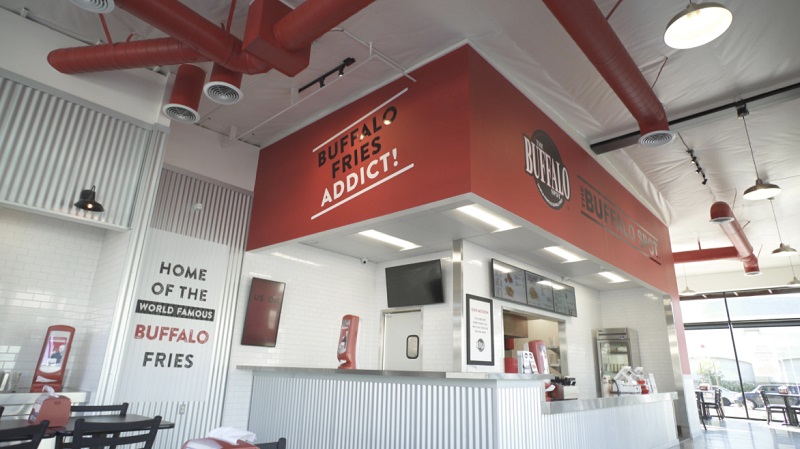 It’s exciting to explore ideas for opening new restaurants in Texas, especially a franchise opportunity in Texas, as the state and city return to business and see more social gatherings. One important question to consider is, how ready is the market landscape to support new or additional fast casual restaurants?

According to reports from the field and consumer surveys, the fast casual business looks like a great place to be as people are eating out more often. In particular, The Buffalo Spot chicken wings and buffalo fries franchises have continued to grow over the last two years, and present a nontraditional franchise opportunity in Houston and the surrounding area.

Houstonians love to dine out, more than almost any other city. That’s good news, as it seems that people who enjoy social occasions and eating with friends and family are doing more of it—even though they’re also carrying out to eat at home, plus keeping an eye on discretionary spending. As fast casual and quick service restaurant (QSR) businesses continue to serve both of those customer preferences, it’s a great time to be looking for a strong and growing food franchise for sale in Texas.

Knowing how much people love their fried chicken, French fries and flavorful sauces, it’s no surprise that The Buffalo Spot continues to stand out as a franchise opportunity in Texas. The menu is simple and delicious, and the price point is more affordable than many full service sit-down restaurants. Some notable statistics from a June 2021 article in Fast Casual Magazine tell us how all of this can be very important to those considering franchises for sale in Texas.

Two other stats worth mentioning:

Franchising and the Restaurant Business in Houston

A franchise opportunity in Texas looks promising when it comes to availability of the customer base, with more than seven million people in the Houston metro area alone. Although 2020 brought changes that had disrupted restaurant employment for many, it also may have added a different perspective for the long-term livelihood of others, including more interest in entering the world of franchising. It’s a chance to take control of a career path, and choosing to explore an established, modern model like The Buffalo Spot franchise makes a lot of sense.

When thinking about endeavors to start a business with a QSR wings franchise opportunity in Texas, one element contributing to a positive outlook is the city’s dynamic cuisine choices. According to the Greater Houston Partnership, “With a population as ethnically diverse as Houston’s, where one out of every four residents was born abroad, it stands to reason that an eclectic restaurant scene would emerge. And that’s exactly what has happened…Houston eateries have made this a food lover’s paradise. Name any country and most likely there is a restaurant in the Houston area that serves delectable dishes from ‘back home.’”

This rationale seems to be one reason why the outlook for The Buffalo Spot as a franchise for sale in Texas is so appealing. Another likely reason is the interest so many people have in finding a convenient new way to enjoy their favorite finger foods, like boneless chicken wings and fries, with the infamous Buffalo sauce (and more!) that they crave.

When a quick service restaurant like The Buffalo Spot leans into this aspect of providing easy access to such popular menu items, combined with its simple, friendly service option for groups and families, it can set itself up to build a truly loyal food brand following among locals.

How The Buffalo Spot Franchise Stands Out

Looking back to its beginnings, we can see how a franchise like The Buffalo Spot was well positioned to address the demands for carry out food in bustling locations like Houston

It all began with founding owner, Ivan Flores, and his first Buffalo Spot restaurant which he opened in Long Beach, CA in 2013. He conceived his offering as a way to “disrupt” the chicken wings business with its intriguing signature menu item called buffalo fries. But in addition to that level of originality, Flores focused on keeping a simple menu and a straightforward approach to food preparation. This enables service to be prompt and cooking times manageable, which he credits as one key to building a thriving franchise for sale in Texas.

In fact, 75% of The Buffalo Spot’s sales are for his World Famous Buffalo Fries – boneless buffalo chicken strips piled on top of fresh-made French fries and topped with sauce. This not only helps differentiate the restaurants, it also helps create a franchise that does not have to operate solely in the popular fried chicken or hot wings space.

And Flores has clearly hit his target by making customers happy with a smart balance of simple choices and superb service. As he says in a recent Fast Casual article, “We engage with our customers to discover which kind of flavors they like so that we can make recommendations toward our 14 proprietary sauces served with our buffalo fries.”

New Franchises for Sale in Texas

Within a few years after opening the Long Beach location, Flores’ corporate stores and franchise locations were opening up in other Texas spots, and continued to progress. More growth is planned into the future, with a long-term vision for expansion throughout Arizona, Nevada, Colorado and Texas, with franchise opportunities in Houston  and other cities in these four states.

With a local population revving up to visit their favorite establishments, The Buffalo Spot customers can count on a tasty platter of food without risking an overly long time standing in line, since customers can place their specially sauced orders and receive their prepared food in a jiffy.

Our years of experience growing our buffalo fries franchise has resulted in an opportunity that can satisfy the entrepreneur’s search for simplicity in the QSR space, with an eye on what customers love! The Buffalo Spot’s world-famous Buffalo Fries and wings are taking markets like Houston by storm. We’re looking to join forces with the right franchise owners to bring our proprietary recipes and fast casual concept to new territories now.

In our on-the-go society, having a restaurant brand that only offers sitdown service can reduce the available market and leave potential revenue on the table. It’s important to be flexible enough to...
Read More

We’re part of an industry that’s been growing for years and is expected to continue that trend in the future, and we’re looking to continue expanding with new food franchises in 2022 and beyond. How...
Read More

How to Own a Franchise Restaurant: Building a Modern Brand

You’ve spent your life building your business and leadership skills, and now you’re looking for a way to take the next step and move into QSR franchise ownership. Knowing how to own a franchise...
Read More